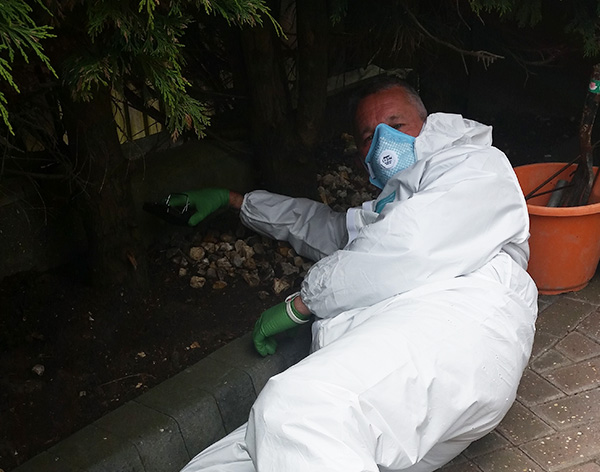 Ants – Which one do I have?

There are over 60,000 species of ant worldwide so the question is: Which of the common 4 do you have? Scroll down to find out more.

You can expect to see the Black or Garden Ant from as early March onwards and first signs of this will usually be noticed in and around kitchens. A domestic pest ants are attracted to sweet sugary foods, pet food, fruit and bin areas where they leave a pheromone trail guiding fellow workers to the source.

Providing a professional service TP Pest Services will need to do a thorough inspection as to the source and size of any ant infestation. This includes a thorough check for satellite nests which some species adopt.

We offer a free site survey which once complete will allow us to discuss all eradication, proofing and control methods, prior to any treatment taking place.

Action needs to follow a thorough assesement as inappropriate use of chemicals can cause nests to split which aggravates the problem as satellite nests soon become established.

TP Pest Services will inform you of the best approach which may incorporate one or more of the following professional use only chemical treatment methods: Baited Gel, Residual Spray Treatment and or use of a Residual Crack and Crevice Powder.

Facts about the pest

2-3 mm long with the adult workers being 3-5 mm long and the Queen who is winged at first being upto 12mm long and living for several years.

The Black or Garden ant is Dorset’s most prolific ant mainly occurring around the sandy substrate of paths and foundations. They are easily attracted into the home by any sugary/sweet substances with the worker ant then leaving a pheromone trail guiding fellow workers to the food source.

The Pharoah Ant differs slightly in its development requirements needing 18* as a minimum with temperatures preferably near the 30* range. Hence their favoured habitat being hospitals, large greenhouses and other large institutions. Nests can be found to contain upto 40,000 workers and 80,000 young stages.

Pharaoh Ants ultimate success lie in them having satellite nests which can prove difficult to eradicate. TP Pest Control Services offer an extremely thorough service to the residents of Dorset due to the complexity of control needed to eradicate this ant.
Picture of ghost ant across screen and labelled

Up to 1.5mm long with a paleabdomen and legs giving this ant a two tone appearance with its dark head and thorax.

The Ghost Ant though not as common has very similar requirements to the Pharaohs Ant regarding climate and temperature range. The treatment by baiting techniques over residual treatments proving most effective.

Up to 2.5mm the workers can be almost shiny brown.

Like the Ghost Ant this species has a single bulge in the waist as opposed to the Pharaoh Ants two bulges. Favourable conditions have allowed this ant to thrive in Dorset growing nearly 8% year on year.

With over 120 years experience between us TP Pest Services offers a friendly discreet service and a free onsite survey by highly trained and insured Technicians.

We are Borough of Poole Trading Standards Approved reflecting our commitment to customer satisfaction and all Technicians are Police CRB vetted.

All TP Pest Control Technicians hold the RSPH – Royal Society for Public Health Level 2 Certificate as a minimum and have undergone specialist training with the BPCA – British Pest Control Association. We are also members of the NPTA – National Pest Technicians Association.